Over this past weekend I had the opportunity to run a single session Starfinder adventure at a good friend’s 50th birthday geekstravaganza. Since many of the folks who would be attending this event were folks who make it to the annual regional cons I Gamemaster at, I decided to run a follow up to the events of Carnage 2017’s Dropship Murphies and TotalCon 2018’s Eclipse Runners/Battle for Nebula City mini-campaigns.

When last we left our intrepid crew, they had managed to save Nebula City from a plot by the nefarious Azlanti Empire and become celebrities in the process. Unfortunately, the Azzies weren’t finished and attacked Nebula City with a small fleet. Nebula City’s merchants and mercenaries stood as a bulwark against the invaders while the local pirates of the Corsair Nebula sought to take advantage of the loser. In the end, the pirates sided with the defenders and repelled the Azlanti. But even as they did, Eclipse — the divinely powered Artificial Intelligence originally stolen by the Dropship Murphies — was able to move herself from the PCs’ ship to the core of Nebula City itself and it winked out of normal space, leaving all surviving ships in the lurch.

We picked up the story a month later. For thirty days the rechristened Eclipse City had been floating in the Drift. Eclipse herself seemed focused on finding something, though no one was sure quite what, and left it to the former Murphies/Runners to maintain order on the station. Despite the respect their previous heroics afforded them, they did not find it an easy task. With no way to get supplies or people on or off the station — Eclipse had made sure all the Drift capable vessels were out defending the station when she engaged the drive — old alliances, agreements and other faction relationships began to fray. And while the station was not yet in danger of starving or running out of air, luxuries were beginning to run low. On a city populated by rich merchants, powerful crime lords, and working stiffs that just want a good drink at the end of a long day, that was enough to heat the pot. It would not be long before it boiled over.

What’s more was a series of anomalies occurring on the station. People were reporting strange experiences and even half remembered visitations. Some unknown force seemed to be watching Eclipse City — or worse.

With all that background established, we got going. The PCs were sent to talk with the leadership of the Recycler’s Union which had begun favoring certain factions over others in providing recycled air and water. It became clear early in the interview process that the Recylcer’s weren’t bad guys but were responding to pressure put on them by other factions. Things looked like they might turn out peacefully, so that is when the vampires showed up. Among the gangs operating on the station, the vampires were poised to do the best as food, water and other consumables were used up. All they needed was an ever increasingly desperate population of cattle willing to send one another to slaughter. So they figured it would be easiest to take out the Recycler’s Union, and if they got the station’s only “cops” in the process, so much the better.

It was a short battle. Vampires might be sexy, and they might scare Victorian Gentlemen, but they are no match for jump jetting dwarves, invisible sniper androids, four armed Not-Jedi, giant lizard commandos or technomancer space elves.

After the cleanup — vampires always die messy, it seems — the party tried to get Eclipse to leave the Drift on account of the growing instability on the station but the AI was focused on her goal: direct communion with Triune somewhere in the Drift. Finding where that “somewhere” was probably would not take more than, say 1000 years, and she only really “needed” 27% of the station’s population when she got there anyway, so it was totally doable. The PCs began to rethink their loyalty to Eclipse at that point.

Before they could enact any plans, they discovered they were not alone on the station. And by “they” I mean “species native to the Prime Material Plane.” A race of psychic, big headed, big eyes, gray skinned beings with a penchant for reading your mind through your local GI tract had infiltrated the station and were trying to find a way to get to the engine core and Drift drive. When they finally managed to get one of the PCs — random rolls indicated the axe weilding dwarf Hoss Bloodhammer — they had the information they needed. The race was on to stop these alternate dimensional interlopers from stealing Eclipse City and dropping it out of the Drift into *their* Prime Material Plane space.

In the end the PCs faced down a group of aliens in Engineering and were able to defeat them. Using the alien plot in their argument, they also managed to convince Eclipse to leave the Drift for her own safety. Unfortunately no one, not even Eclipse, knew where into normal space the station would drop.

Normally, this blog is a place for geekery, the occasional rant and ruminations on writing. Today I want to talk about something far more important: Running for Dylan.

Dylan Hockley was one of the 20 children and 6 educators killed in the December 14, 2012 rampage at Sandy Hook Elementary School here in Newtown, Connecticut. Out of that unimaginable tragedy, Dylan’s Parents Ian Hockley and Nicole Hockley have — like many of the other families of the people who were lost that day — tried to build something good. That thing is the Dylans Wings of Change foundations and the Wingman project. Despite having suffered the worst tragedy imaginable, Ian and Nicole have decided to make the world a better place. I am grateful to know them.

In order to get the Wingman project into schools, where students are trained to be leaders and create a safe and welcoming environment for everyone, they need funds. In order to help with that, I will (again) be running in the Cape Cod Ragnar Relay for them. You can read here about how Ragnar became the main fundraising vehicle of Dylan’s Wings, but suffice it to say we need your help.

What do you get out of it? Well, besides the warmth in the cockles of your heart, you get to make this race more fun for all my van mates! You see, what I wear on my legs will depend on how much money I raise. 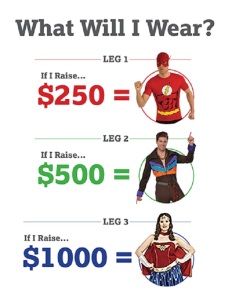 I DARE you to make me do my best Gal Gadot.