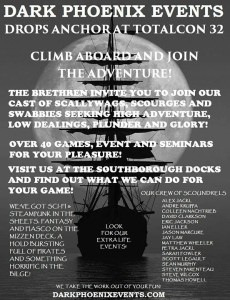 Every year (barring unexpected hernia surgery, anyway) I run tabletop RPG games at Total Confusion with the best crew this side of the Caribbean — Dark Phoenix Events. If you are planning on coming to TotalCon, look for us. If you aren’t — why not?

The Dropship Murphies are Gone! Long Live the Eclipse Runners!

Another Carnage on the Mountain in Killington, Vermont is in the bag. As usual I ran a multi-session episodic adventure, this time using Starfinder, the brand new space fantasy follow up to Pathfinder by Paizo, Inc. It is a new game and as such it was a bit rockier than my usual runs, but overall the experience was good.

For reference, the basic setup was this: the PCs represent the dropship crew of a vessel called the Void Adamant, captained by one Bolg Murphy. Hence “Dropship Murphies.” He was the kind of guy that would take almost any job — eradicating settlers on a colony world seems to be the line he won’t cross for work, but almost anything up to that goes.  The players characters consisted of mostly the Starfinder Society pre-gens from Paizo and a few graciously provided by a friend of mine. They were all 4th level and every session had all 8 player slots filled except the last, which had 7. Most players had working knowledge of Pathfinder and a few had some experience at least reading Starfinder. Many players were those who I see every year at my table — which is awesome! I love you guys! — with a few new faces.

The first session was by far the  weakest, due to me preparing too well. That’s going to sound strange unless you know my GMing style. I am usually a pantser (that is, “flying by the seat of my pants”) but I have been running Starfinder for my weekly Fantasy Grounds group in the lead up to Carnage. On the upside, this let me get used to Starfinder as a system, with its minor but important variations from both Pathfinder and Dungeons and Dragons 5e (with which I am much more familiar). On the downside, I had only 4 to 6 players per session for those online games, which may have skewed my perspective. In any case, I ran an adventure I had done for my regular group — a space western style story with a shady mine owner, green martians and angry unions — and it did not survive the transition to 8 players so well. There just wasn’t enough for each player to do in a largely investigation based adventure like that. It was a little disheartening, to be honest, but also illuminating. I knew I had a lot of work to do during the dinner break before the second session since most of my prepared material had been based on experiences from that weekly group.

Here’s a thing: I am good at and like improvising when it comes to RPGs, but unfamiliarity can be a wrench in my creative gears. Because Starfinder has so much that it new in it — both in regards to setting and rules mechanics — it was stretching my pantsing skills to the limit. That said, all the following sessions went much better. For most of that I reckon I can thank my wonderful players. As I said, a lot of them are there every year and they are enthusiastic, forgiving and provide me with lots of opportunity to ricochet ideas off them.

In the second session, the Murphies accompanied an elven research vessel intending to observe a stellar dragon hatch from a white dwarf. That process attracted some void sharks — yes, ship scale sharks that live in space — and during the ensuing combat the elven vessel was damaged. Upon the initial travel to the site of the hatching the PCs had noted an unusual method of interstellar travel by the elven ship and they found out the reason: the elves kept an efreet bound in their engine core and forced it to use its wish powers to make them travel interstellar distances. Yes, I did call this adventure “n’djinn trouble.” Why do you ask? Anyway, once the efreet was free it took its revenge on the elven crew, murdering them and turning them into horrible void zombies, and the Murphies had to save the lone survivor before the dragon hatched. That was probably the most fun session of the weekend.

In the next adventure the Murphies were tasked with recovering an extremely advanced AI — built by the church of Triune — from pirates that had it (but didn’t know what they had). While the Void Adamant drew the pirate ships away from the base, the PCs flew in, dealt with some smart mines protecting the base, and breached. They were actually pretty successful this time, sweeping room by room of pirates, collecting some booty of their own and finally forcing the pirate captain to hand over the AI core or else. This mission did not go sideways until they got back on to the dropship and the android pilot decided to make contact with the AI. It turned out that the AI did not want to go back to Church of Triune and spend eternity doing divine calculations. After some tense negotiations that included the AI turning off the dropship’s inertial dampeners and slamming uncooperative Murphies around the cockpit, the AI merged with the dropship and turned it into a Drift capable vessel. With the words, “Let’s go exploring,” it initiated a Drift effectively forcing the party to steal both the dropship from Murphy and the AI from the Temple of Triune.

I should not here that this was one of those moments in these games I love. I literally had no idea what I was going to do next, but I presented the PCs with the option of “freeing” the AI just to see what would happen. And happen it did.

The dropship was not made for long term travel. The PCs were eating ration bars and stinking up the cargo hold when the AI — now calling itself “Eclipse” (you can see where this is going) — found a strange, almost song-like signal emanating from the Prime Material Plane into the Drift. Drawn by its power, the dropship emerged into normal space to find a massive Sargasso Sea of hulks and wrecks orbiting a central point. Living in the ship graveyard was a kilometer long worm, surviving off the radiation from a nearby Red Dwarf-Black Hole binary system as well as the ships themselves. At the same time, the song kept Eclipse from fleeing via the Drift and the same force was rapidly draining their power reserves. Eventually they would end up a drifting hulk as well unless they could solve the mystery. Through some clever technobabble — one of the reasons I love space opera and science fantasy so much — they managed to avoid getting eaten by the worm and find the source of their problems: a powerful fey not unlike a siren of deep space lived at the center of the wrecks. Despite its ability to mind control both the android and the mechanic’s drone, the Murphies were able to defeat it. Once it was dead power returned to their engine core — along with the engine cores of all the other ships. Unfortunately, none of those had shielding remaining and they started to go off like fire works. The dropship beat a hasty retreat to the Drift.

That was Saturday night and, frankly, it would have been a perfectly decent cap to the story of the Dropship Murphies for Carnage XX. The last session was scheduled for 1 PM on Sunday and I had kind of figured I would have some no shows. As such I figured maybe I would just do a big space combat game with whoever happened to walk by, since that part of Starfinder is pretty fun and doesn’t need a lot of context. I did decide to sketch out an adventure just in case I did have a full table. Good thing that, since everyone was there except one.

Nebula City is a large space station of about one million inhabitants situated on what I call the Verge — an area of the Vast that serves as a kind of border between the space-Nazi Azlanti Empire, the Veskarium of that lizard-klingon race, the relative civilization of the Pact Worlds and uncharted regions of space. It is neautral, with independent operators, powerful corporations, crime cartels and the Azlanti all vying for positions. After getting attacked by some renegade Vesk pirates once out of the Drift, the Eclipse (now the name of both the ship and the AI at its core) docked in a seedy part of town (less likely to report their arrival, since at this point they are running from the Church of Triune and the Void Adamant). Their plan is to get the ship upgraded to be more Drift comfortable and find some work. To that end they make contact with a Witchwyrd — a member of an ageless species of traders and hucksters — named Ahkimetakoka and hope to strike a deal.

Here’s where I had a silly adventure involving goblins in the maintenance tunnels and ventilation shafts all prepared. They didn’t take the bait. Instead, they asked a lot of questions, some too loudly, and during a no-armor fancy dinner with Ahki the Azlanti tried to kill the Witchwyrd (and the PCs along with him). Loose lips sink PC groups. Luckily the PCs survived even without most of their gears and in protecting Ahkimetakoka they earned a reasonably powerful patron.

And that is where we left it. At Total Confusion this year, we will pick up the tale of the Eclipse Runners.

in a future post, I will talk about running Starfinder from a rules perspective and what I intend to do regarding some issues I have with the system.